DID THE W.H.O. OFFER BELARUS A BRIBE TO LOCK DOWN THE COUNTRY?

Was the leftist Italian government paid to impose the harshest and most disastrous blockade on its country in Europe? 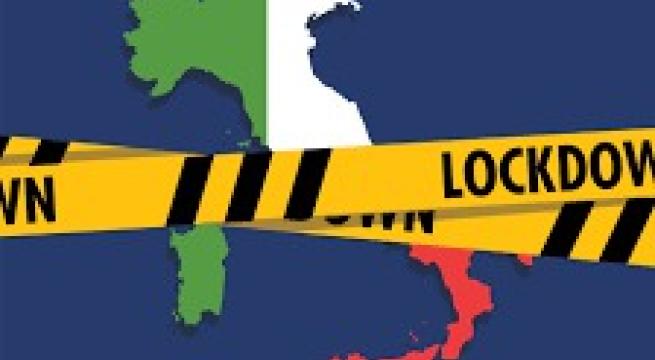 Has the leftist Italian government been paid to impose the strictest and most disastrous blockade on its country in Europe? - Ask the historian and publisher (Publisher: «Edizioni Aurora Boreale»), Nicola Bizzi.

Three judges from the Regional Administrative Court (TAR) of the Lazio region, i.e. Mariangela Caminiti, Ines Simona Immacolata Pisano and Lucia Gizzi, issued a ruling which obliges the Presidency of the Council of Ministers and the Civil Protection Department to publish the contents of the Protocol of the Scientific and Technical Committee (CTS) ), on the basis of which the government of Giuseppe Conte made all the most important decisions aimed at introducing a "state of emergency" (lockdown) - that is, the arbitrary suspension of the rights of Italian citizens guaranteed in the constitution - and the application of all Orwellian measures of repression that we know well and which we have experienced the hard way in recent months - from "social distance" to wearing muzzles.

The documents and protocols have been classified without any objective justification and so far, not only parliamentarians but also members of the government have been unable to read their content, as Deputy Minister of Health Pierpaolo Sileri complained many times.

All of this is happening as we approach July 31, 2020 - the day that should (at least formally) sanction the end of the state of emergency imposed on Italy by Conte in January.

The state of emergency, which despite the increasingly massive protests from hundreds of distinguished doctors, lawyers, constitutionalists, university professors and intellectuals - Conte and his government will try to extend, of course not for "sanitary" reasons, but to cover up their abuses ; to avoid a situation in which interests worth millions of euros are blocked and to continue to rule by decrees - in the silence of Quirinal (ie the President of Italy) and the so-called "opposition".

Last month, the President of Belarus, Alexander Lukashenko - who is known to persistently refuse to take any emergency measures in his country, such as announcing a lockdown or introducing the so-called "Social distancing," he said at a press conference that he had received a substantial cash offer from the World Health Organization ($ 92 million) to do "as it was done in Italy."

In view of Lukashenka's categorical refusal - within a few weeks the offer to the Belarusian president increased tenfold: he was offered 900 million dollars  -  this time by the International Monetary Fund - along with the same request: to close everything and do it "as in Italy".

I know from intelligence sources, continues Nicola Bizzi, that similar offers have been made to many other European and non-European countries. I also know that many heads of state or government - including Serbian President Aleksandar Vučić - have not hesitated for a moment to accept them.

Therefore, logic dictates that Italy (which we well know has played a pilot role throughout history) may have received a generous offer in this sense and - knowing the mentality of our politicians - I very much doubt that it will not be accepted.

Such a hypothesis could also explain where and how the Conte government found funds (probably already at the beginning of the year) for the expansion of the police force, which guaranteed the implementation and effectiveness of the blockade.

I sincerely hope that among the secret acts and protocols that the Lazio Regional Administrative Court has ordered to make public, we will soon find an answer to this and many other unclear issues, such as the crazy and outright incomprehensible directive that "advised against" doctors from carrying out an autopsy.

Today, however, there is a message - although well hidden by the mainstream media - that can be described as at least sensational.

This is information that, in a normal country, would lead to the dismissal of many people, not the entire government: thanks to the courageous attitude of the Covid Commission from an institution called Accademia Nazionale dei Lincei and pressure from Dr. Alberto Zangrillo - what many had previously suspected finally came to light: the Civil Protection Department's statistics - which used to show TV "war" newsletters every day for many months, chaining millions of Italians to their TV screens - was a game of fantasizing.

The existing procedure was technically defined as "data processing in the absence of data" .

These numbers were a gigantic deception with no basis whatsoever, useful only to create an atmosphere of terror in the country.

According to what Giorgio Parisi, president of the Accademia dei Lincei, said, only a self-proclaimed "scientific community", i.e. The Scientific and Technical Committee established on the initiative of Conte) has access to authentic data, i.e. to real numbers.

«We don't know when and how many people died because of Covid. We don't know how many actual infections there are, how many days people were hospitalized, the actual clinical picture of each is unknown. Let me remind you that the figures quoted have always raised doubts, both in comparison with other years and with the number of victims in 2015, which (in that year) amounted to over 50,000, which is 15,000 more than today, and which took place without blocking the country. This unclear matter will be clarified in the future, but we can already say today that the government, and therefore the country, has been subordinated to the deceptive will of the Scientific and Technical Committee, which was achieved through the Department of Civil Protection. The Higher Institute of Health is also involved in the issue. They should all explain to us why in France, Germany, Spain, is the data publicly available in the UK and not in Italy? ». (...)

Dissemination of the content of the translated articles (with the nickname of the author of the translations and the address of the source text) is allowed only on free electronic platforms.

--------
IT HAS BEEN 6 MONTHS SINCE THE FIRST CASE OF COVID-19 WAS RECORDED IN AUSTRALIA. THE NUMBERS NOW ON RECORD REPRESENT A FAIR SAMPLE OF WHAT HAS BEEN THE CRISIS STAGE OF THE PANDEMIC, ASSUMING THAT FROM THIS POINT ON, THE CASES [INFECTIONS] AND DEATHS WILL DECREASE. In other words - the crisis is over and while there may be subsequent spikes or outbreaks, both infections and fatalities will be minimal in the context of what has been touted as a dangerous virulent contagion.
The statistics given in the following are extracted from official numbers as at the end of Sunday, 26 July, 2020, as shown in the above chart. IN SIMPLE TERMS ..........
4,000,000 PEOPLE HAVE BEEN TESTED FOR COVID-19.
OF THESE, 14,400 PEOPLE HAVE TESTED POSITIVE, i.e., 0.36% returned positive tests.
[This is the IR  - Infection Rate], NOTE that positive tests include many who have NO symptoms and may never feel ill, and such tests may include false positive tests [but they are ALL called "cases" by the media].
155 PEOPLE HAVE DIED.
.............. This represents a Case Fatality Rate [CFR] of 0.0038% [Deaths of those who tested positive]. The survival rate of those diagnosed with Covid-19 is over 99%.
.............. This represents a Mortality Rate [MR] in the total population of 0.0006%. In other words the pandemic throughout its worst period has proven to be non fatal for over 99.99% of the population.
WE ALSO KNOW .......
COVID-19 cases were reported across all ages.
WE ALSO KNOW........
The mishandling of the situation in the state of Victoria has exacerbated the situation and vastly inflated these numbers.
The media constantly avoids correct terminology and will not put statistics in context, however this post is not intended to analyze their bias and fake news. That is for another day.
BELOW is Alan Jones' view of the situation to date.
--------
Posted by namnow on July 27, 2020 No comments: