POLYAMORY CRUSADE: The Next Stage of the Slippery Slope.

Even the normies thought the slippery slope from legalizing same sex "marriage" was a fiction.

THERE'S A FLAG FOR THAT.

BAKE THE CAKE, YOU BIGOTED HOMOPHOBE !! 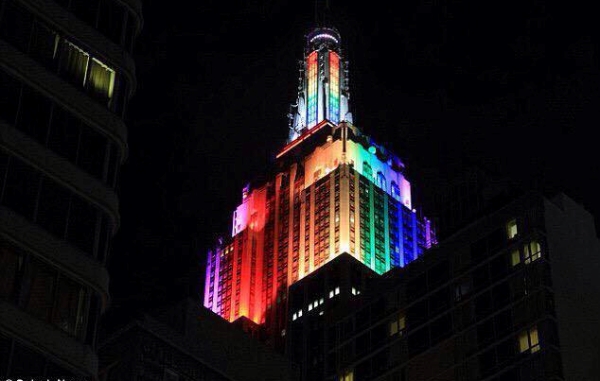 New York's Empire State Building lit up in the rainbow to celebrate the Supreme Court ruling on same-sex marriage in June 2015
[Editor's note: This story originally was published by Real Clear Investigations.]
Advertisement - story continues below
By John MurawskiReal Clear Investigations.
It was only a few months ago that someone last treated Cassie Johns like a freak.
During a doctor’s office visit in February, she was asked to list her emergency contacts. Johns, a preschool teacher in Seattle, wrote down two people -- Chris and Joan -- and identified both as her “partners.” They are two of the four romantic interests Johns has been involved with for many years.
TRENDING: White House press secretary fact-checks CNN's Acosta: 'This is false, Jim'
“‘Oh, that’s so dirty,’” Johns recalled the receptionist saying. “And the receptionist literally stepped back from me, in a doctor’s office.”
Johns, 58, is a polyamorist. She follows a non-monogamous lifestyle in which multiple partners give each other consent to date and have sex with others. Johns’s longest polyamorous relationship has lasted 36 years, twice as long as her former marriage to a polyamorous man. She talks openly about her partners to her preschool students and others.
Advertisement - story continues below
But her forthrightness has a price.
“I have lost jobs, I’ve lost an apartment, I’ve lost a car loan,” because of her lifestyle, Johns said. “I’ve lost friendly relations with neighbors.”
Despite the acceptance of campus hook-up culture and Tinder-arranged trysts, more intentional forms of consensual non-monogamy – which can include polygamy, polyamory, open marriages, group marriages, swinging and “relationship anarchy” – are highly stigmatized. Such behavior is widely considered to be abusive, immoral, or emotionally stunted. People in such relationships not only face rudeness and public shaming, they also lack legal protections against discrimination in employment, housing and child custody disputes.
Polyamorists distinguish their lifestyle from cheating and adultery because, they say, it hinges on the consent of all parties, and can involve unmarried people. Activists say such behavior is more common than many people presume. Some studies suggest that as many as a fifth of Americans have engaged in consensual non-monogamy at some point in their lives. The studies show that at any given time, an estimated 4% to 5% of the population is in a consensually non-monogamous relationship.
While the coronavirus pandemic and social distancing are expected to put a temporary damper on polyamory, those numbers could rise if the social disincentives were removed – in part because some adulterers and cheaters could become consensual non-monogamists.
Advertisement - story continues below
Activists are moving to dismantle the legal and social barriers, and say their goals are beginning to take shape.
They are laying the groundwork to have their cause become the next domino to fall in a long line of civil rights victories secured by trans people, gays, lesbians, women and blacks. Not too long ago, those marginalized groups were also viewed as unnatural, depraved or inferior, until negative judgments became socially unacceptable and often illegal.
The aspirations of non-monogamists don’t sound like such a moonshot in an increasingly tolerant society where a transgender man can menstruate and experience childbirth, and Pete Buttigieg, a gay man married to another man, can make a serious run for U.S. president.
As the topic breaks into the mainstream, some churches are beginning to grapple with the issue, and polyamorous students are forming university clubs and organizing events. Last fall polyamory got attention, some of it sympathetic, when California Rep. Katie Hill, was forced to resign over allegations she was having an affair with a campaign staffer in a “throuple” with her then-husband. A recent TV episode of “House Hunters" featured three adults searching for a home to build their polyamorous nest, and Hollywood celebrities are opening up about their polyamorous lifestyles as well.
Advertisement - story continues below
“There is plenty of evidence that consensual non-monogamy is an emerging civil rights movement,” said Heath Schechinger, a counseling psychologist at the University of California, Berkeley, and co-chair of the Consensual Non-Monogamy Task Force, recently created within the American Psychological Association. “I've heard from a number of people advocating for relationship structure diversity over the past 20 years who are elated about this issue finally gaining traction.”
Activists are already working with elected officials in more than a dozen local governments, especially in California, to expand local anti-discrimination ordinances to include a new protected class, “relationship structure,” said Berkeley psychologist and poly activist Dave Doleshal.
Most efforts are at the informal stage but the city of Berkeley did consider a formal proposal to extend protections in housing, employment, business practices, city facilities or education to swingers, polyamorists and other non-monogamists. The proposal stalled last year amid concerns that it would have required employers to provide health insurance to numerous sexual and romantic partners outside of marriage.
Undaunted by that setback, advocates continue to generate a body of ideas and theories that normalize non-monogamy as a form of positive sexuality -- and possibly an identity -- following a script followed by other marginalized groups. Their efforts have led to reassessments of non-monogamy in the psychological and legal fields, contending the relationships are emotionally healthy and ethical, and thus forging a social movement with a shared identity, shared vocabulary, shared history and a shared desire for full recognition.
Advertisement - story continues below
And, yes, there is already a polyamory pride flag.
Read The Rest Here: https://www.wnd.com/2020/04/polyamory-multi-partner-sexual-rights-crusade-horizon/?utm_source=Email&utm_medium=wnd-breaking&utm_campaign=breaking&utm_content=breaking
Posted by namnow on April 26, 2020