EDITED FROM THE SOURCE AT: https://www.xyz.net.au/coronavirus-miracle-foreigners-flee-australia/


From the Australian:
The coronavirus is driving the biggest population decline in Australian history, with 300,000 tourists, temporary workers and students already departing this year in an exodus that threatens to deepen a consumer spending slump and hit the housing market.
Good. Property is not worth what people pay for it in Australia. The price of property is kept artificially high through the artificial injection of more people to create artificial demand via mass immigration. I refuse to buy property in Australia until this policy ceases.
The number of temporary visa holders in Australia dropped by 260,000 in the first three months of this year, with a further 50,000 departing in the first two weeks of April, Acting Immigration Minister Alan Tudge has revealed.
Research obtained by The Australian predicts a further 300,000 people could leave the country to return home by the end of the year, which economists warn could further erode consumer demand and cause a slump in the rental and housing markets.
It has been gratifying to se The XYZ utilised as a platform by Australian nationalists as a platform for policy discussion. A number of excellent ideas have ben put forward over the years about how to attain power and what to do with it once we have it.
Here is my own genuine policy suggestion.
Within days of achieving power an Australian nationalist government should declare a national health emergency due to an epidemic. It can be for coronavirus, gastro, werewolves. Whatever. Lock the country down for a couple of months, or make it look like you’re locking down, and declare that all foreigners who can leave must leave. The first wave of remigration will occur with no need for financial incentive, nor unpleasantness.
I am not joking. This is 100% my genuinely held belief.
Naturally, the attempted globalist spin has to be seen to be believed.
Analysis by former senior ­Immigration Department official Abul Rizvi estimates that the number of temporary visa holders could drop to 1.82 million from more than 2.4 million at the start of the year. “We could be on the verge of the biggest percentage and absolute decline in our population since 1788, more than during the Great Depression or when we sent troops to the Somme,” Mr Rizvi said.
He estimated one-fifth of foreign students and one-quarter of temporary foreign workers would go.
We have come across Abul Rizvi before. What on earth an un-Australian is doing as the go-to man for the supposedly conservative Australian newspaper when it comes to demographics is anyone’s guess. Does this mean that the Australian is a globalist newspaper?
There is more to these two paragraphs. Note the phrase “absolute decline in population” in reference to the loss of “temporary visa holders”, ie foreign students and foreign workers. When we report that Australia’s net immigration rate is above 200,000 it does not include these temporary residents, nor does it acknowledge their backdoor path to permanent residence. The real figure could be higher than half a million a year. It is yet another example of how our government lies to us and betrays us.
Also note the equivalence of the flight of several hundred thousand non-Australians with the deaths of real Australians during the Great Depression and World War 1. This is simply an insult.
Australia’s population grew by 371,000, or 1.5 per cent, to 25.46 million over the year to last September, of which 63 per cent was due to net overseas migration.
Each new million seems to come around very quickly these days.
In the most recent budget, the government pencilled in net overseas migration of 271,000 this year, up from 259,600 in 2018. More than 800,000 net new immigrants were forecast over the next three years, the budget papers say.
Hadn’t they capped it at 160,000?
Reserve Bank research by Peter Tulip and Trent Saunders, conducted last year, found a reduction in population growth would increase rental vacancies, trim rents and housing prices, and reduce construction.
This is the best thing that has ever happened to any Australian who is not a Boomer.
And they just keep spilling the beans:
Grattan Institute chief executive John Daley said weaker ­population growth would focus ­attention on the recent period of weak growth per capita.
“Per capita recessions will ­become real technical recessions”, Mr Daley said. “Total growth ­matters to Woolworths and ­Westpac and other businesses whose profits depend on population, but it doesn’t help the local gym instructor.”
An admission that artificial GDP growth via mass immigration is in the interests of the elites but it is per capita growth that matters to regular Aussies. The globalists are getting sloppy.
Mr Rizvi said two decades of high temporary immigration had come to a “shattering halt”.
He sounds disappointed.
“If you look at the 1990s recession and 1980s recession, and after the Great Depression, two things stand out: net migration fell like a stone, and fertility fell,” he said. Mr Rizvi urged the government to provide greater support to the estimated 150,000 remaining foreign workers, who he said risked being left “destitute” without jobs in Australia.
“We won’t be able to run a ‘Where the bloody hell are you campaign’ ever again if we told everyone to piss off,” he said…
“The last time we grew out of a big debt, after the war, we had a baby boom and post-war migration surge; neither are likely this time,” said Mr Rizvi, who is completing a PhD in the history of Australian immigration at the University of Melbourne.
Get the bloody hell out of my country, Mr Rizvi.
Bob Birrell, the president of the Australian Population Research Institute, said how government responded to the drop in migrants would be “pretty central to how Australia is going to evolve in the next few years”.
Yes. 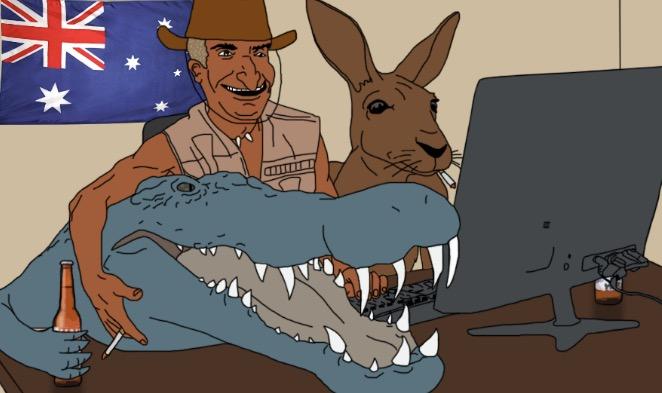