A NOBEL PRIZE WINNER OUGHT TO BE CONSIDERED A RELIABLE SOURCE.

Unfortunately, the source reporting his opinion is being sanctioned by platforms such as facebook. That source is Zero Hedge, so this is copied from a secondary source. Facebook advised us and others that any post claiming that the Covid-19 is NOT NATURAL is misleading and false and our page will be restricted for a week with further penalties possible. It has been revealed recently that one of facebook's fact checkers on this point is a woman who actually worked at the Wuhan Lab [Boom]. What a conflict of interest that is.

Like Zero Hedge, we have said, almost from the beginning after some research, that the virus was bio-engineered. In the following article the respected source attributes the development of the virus to the Wuhan facility alone. We have published further claims in previous posts. Claims that others in the US and possibly other countries carried out preliminary work to develop this virus. [See all our posts with the label "Covid-19"].


Evidence piling up that Chinese virus is man-made 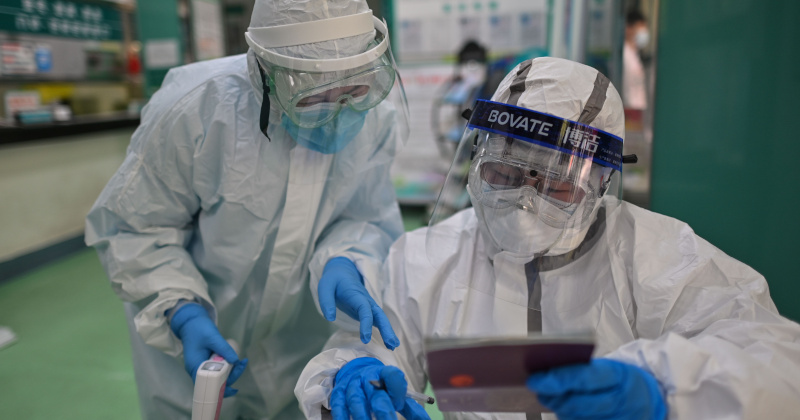 Source: Zero Hedge
As the mainstream media and politicians begin to raise/admit the possibilities that the source of COVID-19 was likely a lab in Wuhan (accidentally leaked or otherwise) – something we first brought to the world’s attention in January before being mocked, censored, and chastised – it appears more actual ‘scientists’ (at least those not paid by or working for a lab in Wuhan) are willing to admit what we noted all along – this virus is man-made.
GilmoreHealth.com’s Robert Miller writes that contrary to the narrative that is being pushed by the mainstream that the COVID 19 virus was the result of a natural mutation and that it was transmitted to humans from bats via pangolins, Dr Luc Montagnier the man who discovered the HIV virus back in 1983 disagrees and is saying that the virus was man made.
Professor Luc Montagnier, 2008 Nobel Prize winner for Medicine, claims that SARS-CoV-2 is a manipulated virus that was accidentally released from a laboratory in Wuhan, China. Chinese researchers are said to have used coronaviruses in their work to develop an AIDS vaccine. HIV DNA fragments are believed to have been found in the SARS-CoV-2 genome.
We knew that the Chinese version of how the coronavirus emerged was increasingly under attack, but here’s a thesis that tells a completely different story about the Covid-19 pandemic, which is already responsible for more than 110,000 deaths worldwide.
According to Professor Luc Montagnier, winner of the Nobel Prize for Medicine in 2008 for “discovering” HIV as the cause of the AIDS epidemic together with Françoise Barré-Sinoussi, the SARS-CoV-2 is a virus that was manipulated and accidentally released from a laboratory in Wuhan, China, in the last quarter of 2019.
According to Professor Montagnier, this laboratory, known for its work on coronaviruses, tried to use one of these viruses as a vector for HIV in the search for an AIDS vaccine!
“With my colleague, bio-mathematician Jean-Claude Perez, we carefully analyzed the description of the genome of this RNA virus,” explains Luc Montagnier, interviewed by Dr Jean-François Lemoine for the daily podcast at Pourquoi Docteur, adding that others have already explored this avenue:
Indian researchers have already tried to publish the results of the analyses that showed that this coronavirus genome contained sequences of another virus, … the HIV virus (AIDS virus), but they were forced to withdraw their findings as the pressure from the mainstream was too great.
In a challenging question Dr Jean-François Lemoine inferred that the coronavirus under investigation may have come from a patient who is otherwise infected with HIV.
“No,” says Luc Montagnier, “in order to insert an HIV sequence into this genome, molecular tools are needed, and that can only be done in a laboratory.”
According to the 2008 Nobel Prize for Medicine, a plausible explanation would be an accident in the Wuhan laboratory. He also added that the purpose of this work was the search for an AIDS vaccine.
The Truth Will Eventually Come Out
In any case, this thesis, defended by Professor Luc Montagnier, has a positive turn. According to him, the altered elements of this virus are eliminated as it spreads:
“Nature does not accept any molecular tinkering, it will eliminate these unnatural changes and even if nothing is done, things will get better, but unfortunately after many deaths.”
Luc Montagnier added that with the help of interfering waves, we could eliminate these sequences and as a result stop the pandemic.
This is enough to feed some heated debates! So much so that Professor Montagnier’s statements could also place him in the category of “conspiracy theorists”:
“Conspirators are the opposite camp, hiding the truth,” he replies, without wanting to accuse anyone, but hoping that the Chinese will admit to what he believes happened in their laboratory.
To entice a confession from the Chinese he used the example of Iran which after taking full responsibility for accidentally hitting a Ukrainian plane was able to earn the respect of the global community. Hopefully the Chinese will do the right thing he adds.
ABOVE SOURCE: https://nworeport.me/2020/04/18/scientist-who-discovered-hiv-says-covid-19-could-only-have-been-created-in-a-lab/
Posted by namnow on April 18, 2020